The house of Infinte, by Alberto Campo Baeza 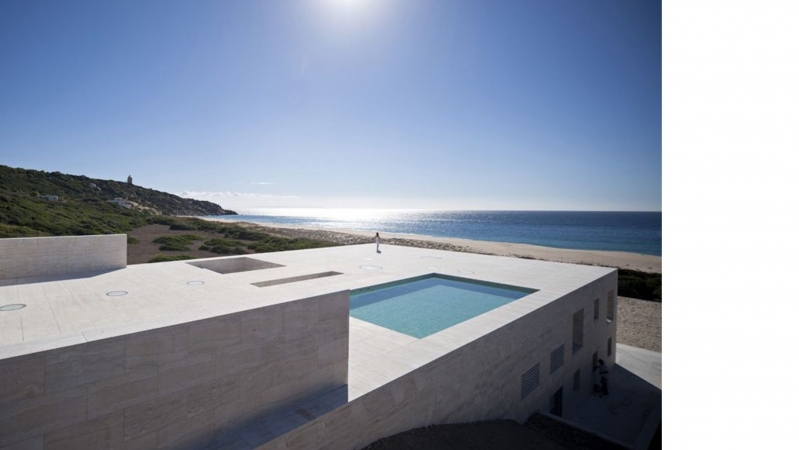 The house of Infinte, along the beaches of Cádiz

Along one of the beaches of the marvelous port city of Cádiz emerges The House of the Infinite. The structure was designed and built by Alberto Campo Baeza’s architecture studio situated a few meters from the beach, precisely where boats still pass from the Mediterranean to the Atlantic. Inspired by antique Roman acropolises, the project is composed of spaces with large, flat, planar surfaces. Sand-colored travertine throughout the entire project seamlessly anchors the house in its context, solely interrupted by the framing of large, glass apertures and thin entrance slots.

The house of Euclidean geometry

The most spectacular part of the house is the vast, nude roof which extends into the horizon, like a dock immersed in the sea, protected by the coarse walls against the strong winds characteristic of this area, referred to as “the same winds that inflated Ulysses’s sails.” Formally, the roof cover is a study of Euclidean geometry, “a product of detached and abstract intelligence.” It sits upon an enormous concrete “box,” twenty meters in width by thirty-six in depth. Two floors of living space are inserted into the excavated rock, while the entry to the house is a thin staircase carved into the upper platform, acting as a true “temenos” from Roman mythology, a meeting place for men and gods.

The House of the Infinite is a construction capable of stopping time while remaining in the heart of humanity.

A "green" building in the heart of New York

Living in a Minion-shaped house... in the forest